Oregon courts issue divorce decrees that dissolve the marriage as well as provide for the terms of the divorce. When couples divorce in Oregon, state law governs important aspects of their split, including child custody, child and spousal support and property division. Oregon statutes serve as the guidelines judges use when dividing assets and debts between the spouses. 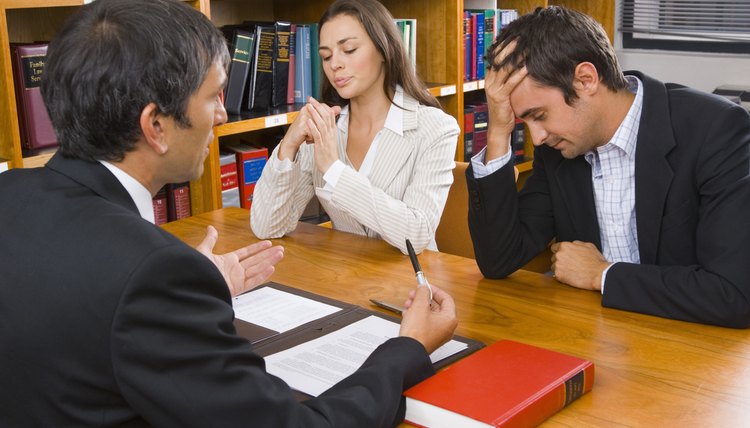 Couples in Oregon can avoid having a judge make decisions for them by reaching their own agreement on how to divide their assets and debts either with or without the help of a mediator. Agreeing spouses can draft a settlement agreement, which the court will review -- and incorporate it into the divorce decree upon approval. Once the agreement is part of a court order, it is just as enforceable as any other court order. If a couple cannot agree on the terms of their divorce, the court will divide their assets and debts, as well as determine custody and support.

When it comes to property division in divorce, Oregon is an equitable distribution state, which means Oregon courts distribute marital property equitably -- but not necessarily equally -- between the spouses. While the courts presume a 50/50 split is equitable in most cases, there are no rigid rules regarding division of property. Instead, courts consider various factors, including the contributions each spouse made to the marriage and the earning potential of each spouse.

Before an Oregon court can divide property, it must determine whether it is marital property, which is the property of both spouses, or the separate property of one spouse. Generally, any assets acquired during the marriage are considered marital property, except assets a spouse acquires as a gift, by inheritance, or as the result of a personal injury settlement. Marital property can include many types of assets, such as a couple’s bank accounts, marital home, retirement benefits or business interests.

Courts divide marital debts in the same manner as marital assets, splitting them between the spouses in an equitable manner. In a divorce decree, the court lists the debts each spouse is assigned to pay. However, creditors are not bound by the divorce decree, so the spouses must take steps to remove the other spouse’s name from the debt. For example, if both spouses’ names are on a vehicle title and loan, and the court awards the vehicle to one spouse, that spouse will likely need to change the vehicle title with the state motor vehicle department -- and refinance the vehicle loan to remove the other spouse’s legal responsibility to pay the loan.

Divorce is never easy, but we can help. Learn More
The Equitable Distribution Statute in North Carolina

During your divorce proceeding, the New Jersey court has authority to divide your marital property, including real estate, personal belongings and some retirement benefits. If you don’t want the court to divide your property, you and your spouse can mutually agree on a division and distribution of marital property, and the court may adopt that division. But New Jersey courts do not have authority to divide Social Security benefits.

Illinois couples must split their assets as part of their divorce, and these assets can include many types of retirement plans as well as assets like cash, real estate and personal property. If a divorcing couple cannot reach agreement on how to divide a pension or other asset, the court must decide the issue for them.

How to Prepare a Legal Separation Document

A legal separation is a divorce in all but name. It can serve as a temporary solution for couples desiring a "trial" divorce, or as a permanent arrangement for couples unable to divorce because of religious convictions or financial affairs, such as the need for one spouse to continue on the other's health insurance. Drafting a legal separation agreement requires that both spouses come to terms regarding the same legal and financial issues resolved in a divorce case, including distribution of assets and debts, child custody and support, and spousal support. In some states, courts review and grant legal separation agreements, while in others, the agreement stands as a contract between the parties.

Though many couples focus their efforts in a divorce on who gets a greater share of the property, the way your debts ...

California is a community property state, meaning a husband and wife each own half of all the property and assets ...