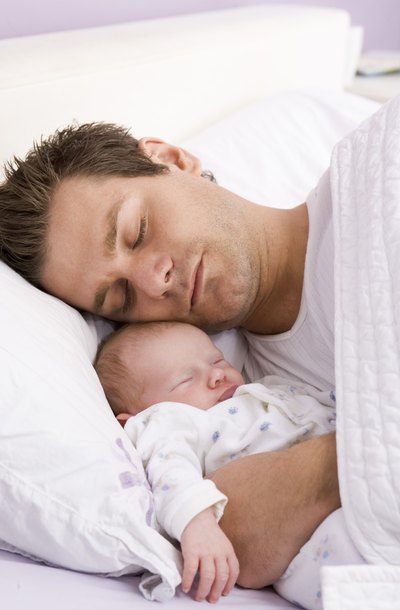 When a child is born to two married parents, the law generally assumes that the child is the biological offspring of both individuals. When a child is born to an unwed mother, the child's paternity isn't automatic. In most states, a father can opt to sign a voluntary acknowledgment of paternity noting that the child is his. This gives the child the same legal rights to benefits from her father that she would have had if her parents were married at the time of her birth. If the father refuses to sign a paternity acknowledgment, the mother can go to court and request that the state require the alleged father to submit to a paternity test to establish paternity. The father also has the right to go to court and request the right to take a DNA test and establish paternity – even if the mother objects.

Custody establishes who has the right to make decisions for a child and dictates who provides the bulk of the child's care. An unwed mother has full custody of her child until a court decides otherwise. The noncustodial parent can file for full or joint custody at any time. How successful a given custody case will be varies depending on each parent's history and case law in the state where the custody case takes place.

Divorce is never easy, but we can help. Learn More
Child Custody Rights for Mothers in California

Custody arrangements are called "time-sharing plans" in Florida. When parents divorce or separate, they will need to decide on a time-sharing plan. If they are unable to do so, a Florida court will issue an order setting forth each parent's rights to spend time with the child, based on what is best for the child.

During a divorce, California courts determine custody arrangements for the divorcing couple’s children, splitting both physical custody (who the child lives with) and legal custody (who makes important decisions for the child). However, parents don’t have to wait for divorce to determine custody issues since California allows parents to establish custody arrangements without filing for divorce.

In most states, when an unmarried woman gives birth, she automatically and legally has sole custody of her child. ...

Abandonment occurs when a parent has no contact with a child for a set period of time, which varies by state. Although ...

Tennessee child custody statutes overwhelmingly support the mother in cases where the parents of a child are not ...

Tennessee law emphasizes each child's right to financial support from both parents regardless of the parents' ...