The simplest divorces are usually those where you and your spouse divide up your property and debts and be on your way. If you have children, however, it's not going to be quite that easy. Courts take the welfare of children very seriously. Most require that parents participate in a special parenting class as part of the divorce process, even if custody isn't contested. 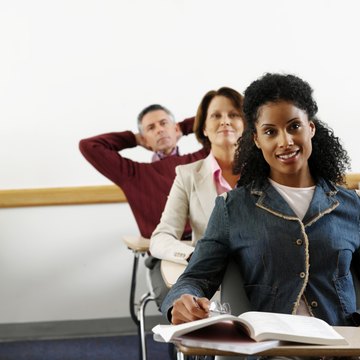 Court-ordered parenting classes focus less on your parenting skills than on the impact the divorce is likely to have on your children. Most classes aim to prepare you for the issues involved in co-parenting from separate households after your divorce, especially if your divorce is not civil or amicable. Parenting classes can help you be on the lookout for signs that your child may be experiencing serious problems with the breakup of the family.

Most states have lists of court-approved class providers -- you can't just pick one out of the phone book. In some areas, such as Arizona and Oregon, you have no choice but to attend in person. Other states, such as Nebraska, allow you to take the course online. Alaska requires parents to watch a video or take Internet instruction, and -- if you're contesting custody -- attend a special additional class. You usually can't fudge attendance; the course instructor issues you a certificate when you've completed the class, which you must submit to the court. Some states, like Iowa, won't issue a divorce decree if both parents have failed to attend parenting classes. In others, such as Delaware, judges can consider a refusal to attend when deciding which parent should have custody. Generally, most classes last only about three hours, although in some states, they can take much longer.

If an unusual or exceptional circumstance exists, you may be able to get out of attending the class. Only the court can waive your attendance, so you must file a motion as part of your divorce action seeking permission to skip the class, and you'll need a good, logical reason. For example, classes might only be available at night, and that's your work shift. If you and your spouse filed for divorce last year and reconciled, but it didn't work out so you've filed for divorce again, you might be exempt because you recently attended the class. If domestic violence is an issue between you and your spouse, you'll still have to attend, but you can take separate classes -- you don't have to go together. New Jersey requires that all spouses attend separately.

Divorce can be an expensive undertaking, and the parenting classes usually cost money too. The fee is usually under $100. If you can swing the expense, some programs offer financial aid or payment plans, or the court may waive the fee if you apply for special relief. You usually pay the class provider directly, but in some states, the fee is a mandatory part of the filing fee when you file for divorce.

Divorce is never easy, but we can help. Learn More
How Soon After We Take Parenting Classes Can Divorce Be Finalized in Georgia?

The prospect of dealing with a divorce is traumatic enough. When you don't know what to expect from the process, it adds to the stress considerably. Listening to friends' renditions of what they went through usually isn't helpful, because few divorces are exactly alike. Uncontested divorces can be final in a matter of months in most states, while contested divorces usually go through several adversarial stages.

What Is a Global Agreement in a Divorce Case?

When something is global, it addresses or involves every aspect of an issue. If you're divorcing, reaching a global agreement with your spouse generally means you've had a meeting of the minds on how to sever or tie up every possible string that holds you together. This includes custody and child support, if you have children. It also covers property division, debt division and alimony. It addresses retirement plans, the marital home – even disposition of a business, if you own one. Some states, such as New Jersey, don't use the word "global." They refer to such an agreement as "comprehensive."

How Much Does a Divorce Cost in Georgia?

No matter where you live, the money you must spend to get divorced depends a great deal on what’s at stake. If you and ...

Divorce has the reputation for being messy, costly, time-consuming litigation, and sometimes that is unavoidable. ...

Just as a puppy is less expensive to care for than a full-grown dog, the older your divorce case gets, the more money ...

The Steps to Take in Getting a Divorce in West Virginia

Some states are more divorce-friendly than others. Beginning a divorce is usually just a matter of completing the ...