Who Pays the Debts in Texas Divorces?

Texas is technically a community property state, but when it comes to divorce, it does things a little differently from other community property states. Most divide debts 50-50 if they were acquired during the marriage, regardless of which spouse actually contracted for them. Texas makes a distinction, however, and the rules are a bit complicated. 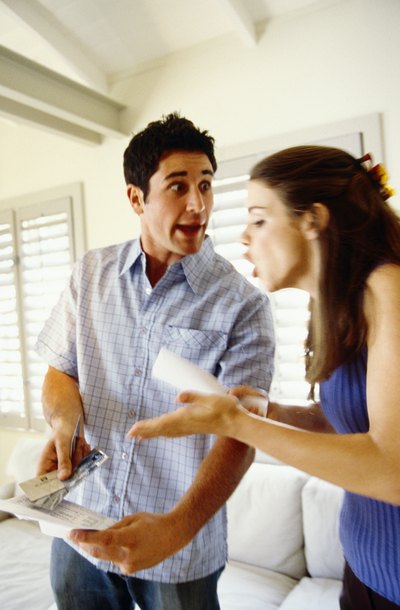 Only marital debts are subject to division in a Texas divorce. The court differentiates between accounts owed before the marriage and those contracted for after the wedding. If you took out a student loan, then got married, the loan is your separate debt, and the court won't deal with it in your divorce. If you took out a credit card after you got married and ran it up to its limit, this is a marital debt – but the court may not divide liability for it evenly between you and your spouse, depending on certain circumstances.

Under Texas law, the fact that you're married doesn't automatically make each of you responsible for the other's financial obligations – at least not as a blanket rule. To achieve a fair resolution in a divorce, Texas courts look to which spouse actually incurred each debt, and why. If you took out a credit card in your sole name during your marriage, this type of debt is directly yours -- but only if the purchases were luxuries that you alone benefited from. When debts are incurred to purchase necessities, your spouse becomes indirectly responsible for them, even if they're in your name alone. Another exception exists if you borrow money because your spouse asked you to. For example, if he's in the hospital suffering from injuries caused by a car accident and he asks you to sign on the dotted line to buy him a new automobile so he has something to drive when he's released, you acted as his agent in the transaction, even if the debt is in your name. In this case, he's indirectly responsible for paying the debt, and it can be divided in a divorce or assigned to him for payment.

How Divorce Affects Your Creditors

The rules regarding indirect and direct debts apply in a divorce, but not necessarily to your creditors. They're not bound by the terms of your decree. If you and your spouse jointly signed for a debt, the creditor can still pursue both of you for payment, even if a divorce court assigns responsibility for payment to your spouse. Because Texas is a community property state, your spouse's sole creditors can often look to community property for payment as well. This involves a whole host of other complicated rules, some of which depend on who actually had control of the community property during your marriage. If you're concerned about creditors coming after you for payment of one of your spouse's debts post-divorce, speak with an attorney to find out your rights and take steps to protect yourself.

If you and your spouse separate for a while before filing for divorce, debts incurred by either of you after you move into different residences are technically marital debts. Texas draws the line at the date of the divorce for differentiating between separate and marital debts at the end of the marriage, so post-separation debts can be subject to division by the court as well, if you and your spouse don't reach a settlement agreement regarding them.

Divorce is never easy, but we can help. Learn More
How Is Marital Debt Divided in a Divorce in Georgia?

Though many couples focus their efforts in a divorce on who gets a greater share of the property, the way your debts are divided may be even more important. Your debts don't disappear when you divorce, so the court must split those debts fairly or evenly between you and your spouse, depending on state law.

Bills and debts don't typically pass from a spouse to his surviving spouse in Georgia. A surviving spouse doesn't inherit them, and the Federal Trade Commission protects survivors from harassment by bill collectors who may try to convince them otherwise. Exceptions exist, however, so you might find yourself in a position where you want to either dispute the amount of the bill, or your liability for paying it.

Can One Party in a Marriage File Bankruptcy?

In most respects, marriage legally joins two people at the hip, but this is not always the case when it comes to financial obligations. No law exists that says your spouse must join you if you decide to file for bankruptcy. There may be some downsides to going it alone, however.

Who Pays the Debt in a Divorce in Kentucky?

Married people incur debt as a matter of course. They purchase homes and automobiles. They take out credit cards for ...

Can Bankruptcy Clear My Ex Spouse's Debts After Divorce?

When a couple divorces, the court issues a divorce decree that divides assets and debts between the spouses, but either ...

When you lose your spouse, the last thing you want to concern yourself with is who is going to pay his debts. If you ...

The Liability of Medical Bills During Divorce in Florida

Florida's "equitable distribution" law seeks to make a fair division of both marital property and marital debts when a ...