Penalties For Divorce Perjury in Georgia

Intentionally lying under oath is a crime, and the penalties for divorce perjury are the same as the penalties for any other form of perjury in the state of Georgia. A person convicted of perjury in Georgia faces a fine of up to $1,000, a sentence of one to 10 years in prison, or both. It is rare that perjury committed during a divorce trial results in criminal prosecution. However, the strongest penalty for lying in during divorce proceedings may be the irreparable damage you do to your case. 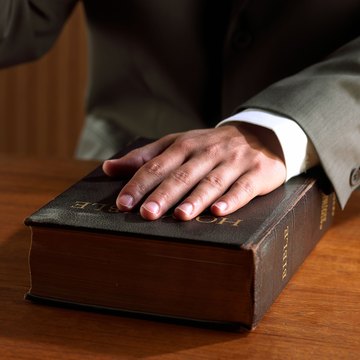 Making false statements while testifying during a hearing in open court is the most obvious form of perjury. This blatant form of perjury would be most likely to result in criminal prosecution. Testimony is also given during depositions in many divorce cases. In a deposition, a person is sworn in by a court reporter and must answer questions under oath from the opposing attorney. If you lie during a deposition, you are committing perjury.

Perjury goes beyond false testimony in a trial. Presenting false information in any document sworn to under oath constitutes perjury. The state of Georgia requires that all initial divorce complaints be verified by the person filing for divorce. The verification is a document attached to the pleadings in which you swear under oath that the statements in the complaint are true, and it must be notarized. Whenever you sign something before a notary, you are swearing under oath that your statements are true. If you sign a financial declaration or affidavit that contains false information, you are committing perjury.

Discovery is the process of gathering information from the other side in complicated divorce cases. Georgia allows three forms of written discovery. Interrogatories are written questions from your spouse that you must answer under oath, also in writing. Requests to Produce are requests for documents concerning the case, such as bank statements or phone records. Requests to Admit are when your spouse asks you to admit certain statements. Giving false answers during the discovery process is another form of perjury.

Although it is unlikely that you will be prosecuted for committing perjury in family court, making false claims can seriously damage your divorce case if the truth comes out. Your credibility will be damaged and it will be hard to convince a judge to see your side of the issues. Once a judge knows that you have lied, all of your testimony is suspect. As a result, you could pay for the lie by losing in the property settlement. The best way to deal with compromising information is to tell your attorney the truth about everything. Your attorney will be able to guide you in dealing with the tough questions as they arise.

Divorce is never easy, but we can help. Learn More
How to Answer Divorce Interrogatories

How to: Formal Request for Discovery in Family Law

It isn't likely you will pass through the straits of divorce without discovering something about your spouse's character and your own, but the legal term "discovery" refers to something more formal: the procedures available for getting questions answered in a lawsuit. Trust is one of the first casualties of a divorce, making information-gathering difficult; the discovery process fills that gap by requiring each party to provide true information under penalty of perjury, but only if the asking spouse follows state procedures.

How to Give a Testimony at a Divorce Hearing

A courtroom is an intimidating place under the best of circumstances. If your divorce case goes to trial, it can be a truly traumatic experience when you have to testify in open court. The division of your marital assets may be at stake, as well as child support and custody of your children. Under such circumstances, it's vital to testify in a way that enables you to obtain the best possible outcome. That's equally true of witnesses as well as the divorcing parties. If you are a party to a divorce, or testifying on behalf of one of the parties, you want to put your best foot forward.

Consequences of Libel & Slander in a Georgia Divorce Case

There's a lot at stake in divorce – everything from regular time with your children to your share of marital property. ...

What Happens When You Lie on Your Divorce Financial Affidavit?

If you lie on a financial affidavit during your divorce, you could face repercussions from a verbal reprimand from the ...

Tips on Giving a Deposition for a Divorce

Divorce cases can be much like other civil lawsuits, and depositions can be used in divorces like they are in other ...

Can You Revoke a Sworn Affidavit in a Divorce Case?

The divorce process is riddled with occasions when you're asked to sign documents under oath. Most include language ...