Penalty for Taking Advantage of Power of Attorney

A power of attorney is a legal status given to an agent by a principal. Under a power of attorney, an agent is able to engage in legally binding conduct on behalf of the principal including buying and selling real estate, making investments, managing assets or entering into contracts. If the agent takes advantage of his power of attorney, he could face civil penalties including restitution of lost money or a judgment for damages and fees. Conduct amounting to a crime could result in incarceration or significant criminal fines. 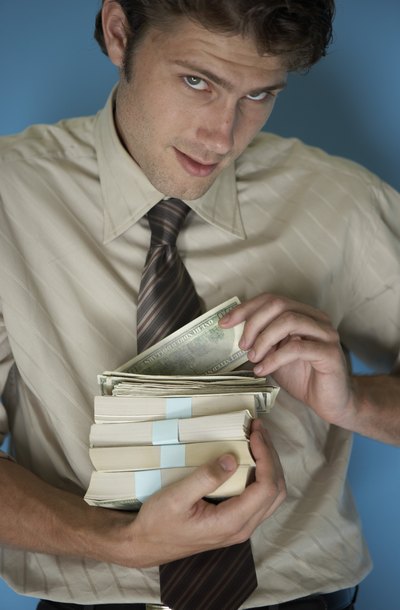 Restitution is a term meaning to pay back the victim of a civil violation or crime. If an agent has misused his authority under a power of attorney, a civil action against him could include the requirement that the agent refund the principal the entire sum lost by the misuse. Many states also permit the imposition of an interest rate on money misappropriated or otherwise taken unlawfully.

Many states maintain a cause of action allowing a plaintiff to petition for an accounting or review of an agent's performance. If family members believe the agent is engaging in misuse of the power of attorney, a court can order a full financial review of the accounts through an independent, third-party accountant. Likewise, the principal-agent relationship gives rise to a fiduciary duty that may be reviewed by a court upon petition. The fiduciary relationship imposes a duty of loyalty and care upon the agent and any deviation from these standards could result in liability for the agent.

In a civil action against the agent, the court could order the violator to pay money damages to the principal for additional losses incurred as a result of the misconduct. These damages are above and beyond the base amount lost and could include damages for loss of business opportunities or interference with investments. For instance, if an agent is directed to manage an investment portfolio and misallocates funds resulting in lost profits, the court could award the principal the lost profit amount. If an agent's conduct is especially malicious or intentional, the court may award punitive damages, which are damages above and beyond the actual amount lost and are designed to punish the defendant and deter others from engaging in similar conduct.

Many states allow for a plaintiff to request reasonable attorney's fees and costs incurred to prosecute the action against the agent. This amount becomes part of the total judgment entered against the defendant and generally includes the amount of money the plaintiff spends on court fees and legal counsel to win back the missing funds.

Taking advantage of a power of attorney also carries possible felony or misdemeanor criminal penalties. The severity of the charges depends on the amount of money taken or the complexity of the wrongful conduct. Possible charges include extortion, exploitation, embezzlement, money laundering, theft, larceny, fraud or forgery. If the victim is elderly or incompetent, many states maintain sentencing enhancements.

Ready to appoint a power of attorney? Get Started Now
Can a Person With Power of Attorney for Another Profit From the Sale of a House?

How to Contest a Power of Attorney

Can a Judge Take Away Someone's Durable Power of Attorney?

An agent under a durable power of attorney has legal authority over someone else's finances or medical care decisions. But he is also a fiduciary, held to the highest duty of care known to the law. If the agent violates that duty of care by failing to act in the best interests of the principal, a court can take away his authority and hold him accountable.

A power of attorney grants someone else the power to perform legal acts for you, such as consenting to medical treatment or signing a contract in your name. Some states require the use of statutory forms for certain purposes, and some websites offer optional templates that you can use. You can use a power of attorney that you drafted yourself as long as it complies with state law.

How to Determine a Misuse of Power of Attorney

There is a significant danger to an agent misusing his power of attorney because it may be hard to observe. The power ...

For elderly individuals, a financial power of attorney (POA) can be an important tool for managing property and making ...

Can I Dispute Power of Attorney of the Deceased?

A power of attorney is a legal document that grants a person the ability to act on behalf of another. The person giving ...

A power of attorney is a written authorization by which a person, or principal, authorizes another person, the agent, ...