Probate Laws for Dying Without a Will in Minnesota

Even when people don’t write a will that dictates how they want their assets distributed when they die, most do leave some property that requires legal transfer to their heirs. Probate is necessary to effect the transfers. This is easiest when there is a will, but the process is similar in Minnesota when a decedent dies intestate, or without a will. The major difference is that without a will, the state distributes the decedent's property according to law and under the terms of its Uniform Probate Code. 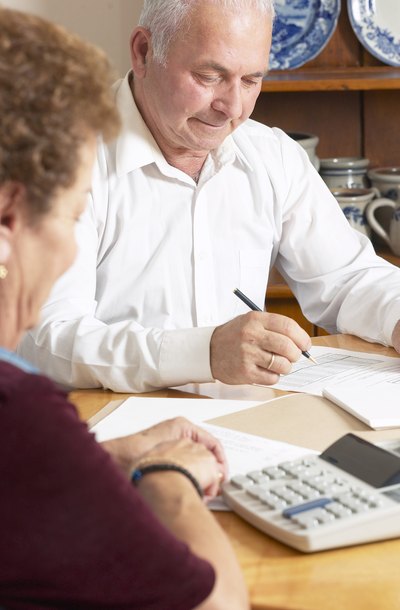 Minnesota’s process of opening probate without a will is similar to opening probate with one. The person who wishes to act as executor of the estate must submit a copy of the death certificate to the probate court in the county where the decedent lived when he died. That person must also submit a petition or application for opening probate and asking for appointment as executor. If the court approves the appointment, and if no heirs object, the executor can proceed with probating the estate. Family members are usually favored as executors when a decedent doesn't have a will. The court determines whether probate should be formal or informal, depending on the complexity of the estate.

Because the decedent did not leave a will specifying to whom he wanted to leave his property, the executor has no choice but to distribute the assets according to Minnesota state law. The decedent’s spouse receives the entirety of his estate left after debts and taxes, unless the decedent has children who are not also the children of his spouse. In this case, the spouse receives the first $150,000 of his estate, and the balance is divided, half to her and half to his descendants: children, including unborn children; grandchildren; and great-grandchildren. If the surviving spouse has children who are not also the decedent's children, and if he never adopted them, they are not in line to inherit under Minnesota's intestate succession laws. If the decedent had no spouse, his children receive the entirety of the estate. If he has no spouse or children, his estate divides first between his parents, and if they are not living, then their descendants.

Minnesota courts make every effort to find some known heir, even if the decedent had no spouse or children and is not survived by parents, nieces, nephews, brothers or sisters. If absolutely no one is found who is related to the decedent by state law, and if he did not leave a will directing anyone else to inherit, his remaining estate after debts and taxes reverts to the state.

Protect your loved ones. Start My Estate Plan
What Happens When Someone Dies Without a Will in Nebraska?

Colorado State Laws on Community Property When a Spouse Dies

When a Colorado spouse dies, his property is distributed by the terms of his will, if he has one; however, a spouse cannot completely disinherit his spouse in a will since Colorado law steps in to limit how much the deceased spouse can give away to someone else. If a spouse dies without a will, his property passes according to state law, which gives a large share to his surviving spouse.

Do You Have to Divide an Estate to Include the Children of a Deceased Brother?

When a person passes away, his estate is divided among his heirs. The person responsible for this is called the "executor" or a "personal representative." In some cases, it might be necessary to include a deceased brother's children. It depends on whether the deceased left a will, who the surviving family members are and the laws of the state.

Probate is the means by which a court transfers legal ownership of property from a deceased person to his heirs, usually according to his wishes as reflected in a will. Transferring legal title to property usually requires a probate proceeding in Louisiana, regardless of whether the decedent left a will. Louisiana allows the winding up of some relatively small estates without a probate proceeding, but all the conditions imposed by state law must be met in order for a probate court to distribute estate assets without a formal probate proceeding.

Under Michigan law, when a person dies without a will, it is said the person died intestate. The law has rules for what ...

If you die without a will in Louisiana, you have no control over the distribution of the estate you leave behind. It’s ...

How to Divide Property Among Heirs in Mississippi

When a person dies with a valid will, his estate’s executor distributes his property according to the terms of his ...

What Happens After an Estate Has Been Probated?

Whether a person dies with our without a will, in most cases, his estate must go through the probate process. Although ...