What Does Renunciation of a Will Mean?

Renunciation means giving up, or renouncing, your right to something. It is not uncommon for someone named in a last will and testament to renounce rights or property given to him in the will. Reasons might range from financial to personal. State laws are set up to allow this. No one can be forced by the terms of a will to do something they do not want to do. 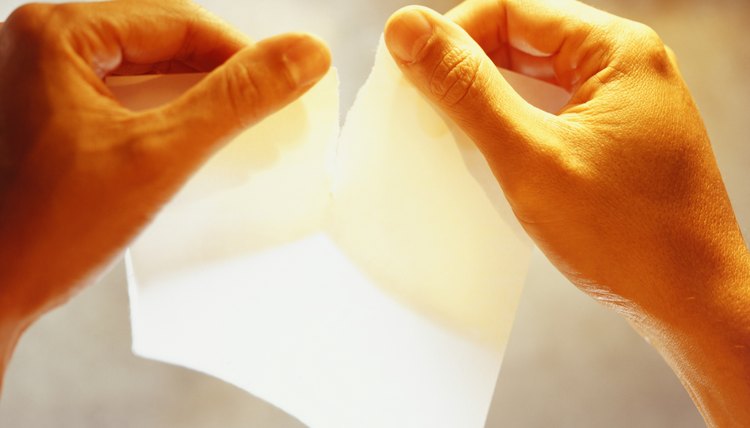 Most states will not allow you to disinherit your spouse. If you try, he has a legal right to “take against” or renounce your will in favor of accepting a statutory share of your estate instead. The percentage of the share varies from state to state but is usually one-third to half of the estate’s entire value. He can also do this if you leave him less than whatever the share is in your state. By renouncing your will, he declines to take whatever you did or did not leave to him and elects to take the share provided for in your state’s laws instead.

A beneficiary can also renounce a gift or bequest made to her in a will. This sometimes occurs if the beneficiary wants to avoid tax liabilities that might be associated with the bequest. Because of this, Section 2518 of the Internal Revenue Code contains specific requirements for a beneficiary to decline an inheritance. Generally, the bequest reverts back to the estate when this happens and is distributed to other beneficiaries as though the original one had predeceased the testator, or the person who wrote the will.

Executors named in a will might decline to serve in the position because they feel unqualified or simply don’t want to take on such a complex job. Executors can renounce a will and their appointment to oversee probate of the estate by filing a renunciation form with the probate court. Many states have procedures in their statutes to relieve the executor of duty if he does nothing toward probating the estate for a prescribed period of time, usually 30 days. This is called “implied renunciation.”

When someone dies intestate, without a will, or fails to name an executor for her estate in her will, the court will appoint someone to fill the position. A spouse usually has the first right to the position, followed by children of the deceased then more distant relatives. If a more distant relative wants to administer the estate, most states require that the spouse and children of the deceased first renounce their rights to do so because they would have been the first entitled to the job. Some states allow them to also nominate the person who does want to serve at the same time they renounce their rights to take the position.

Protect your loved ones. Start My Estate Plan
Can an Heir Be Deleted From a Property Inheritance?

To make a last will and testament in Illinois, you must be at least 18 years of age or be emancipated from your parents by marriage or court order. Your will must be in writing, signed by you and witnessed by two people. Someone may sign your name for you if you are unable to do so, but that person cannot be one of your witnesses. Illinois accepts self-proved wills that might be eligible for simplified probate. A self-proved will is one with an attached notarized statement by you and your witnesses that the will is authentic.

Does an Executor of a Will Receive More?

The job of an executor is to handle the estate of the deceased. In most cases, the deceased names the executor in his will. When there is no will, or when an executor can't complete the task, a probate court will appoint one. Under state probate rules, executors are responsible for filing the petition of probate and the will with the probate court and then seeing the process through to final distribution of the deceased's assets. Acting as an executor can be a complex and time-consuming process, but fortunately state laws also allow for fair compensation to executors from the estate assets.

What Are the Benefits of Wills?

Many adults do not have a will. Whether this results from an unwillingness to face the idea of death or from fear of exorbitant attorney fees, the consequences are severe. A person who dies intestate -- or without a will -- forfeits her opportunity to name who will inherit her assets. She also misses her chance to select an appropriate and trusted guardian for her minor children.

The Rights of Children From a First Marriage

After your death, your assets will be distributed to your beneficiaries or heirs once your debts are paid. Who inherits ...

Dying without a will can leave your heirs unhappy in more ways than one. When an individual dies intestate, the court ...

Marriage gives spouses throughout the United States certain rights when it comes to inheritance and divorce. However, ...

Every state has its own set of unique laws that govern inheritance. These laws, known as "laws of intestate ...