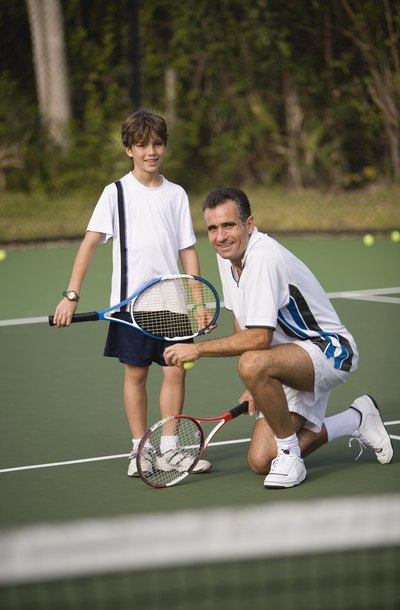 A father has a legal right to frequent communication and regular visits with his natural or adopted child. A father also has a legal obligation to provide financial support to his child. Both the father's rights and obligations are based on his parental status. Once paternity is established, a father is usually entitled to either sole or shared legal and physical custody of his child. A father does not automatically lose those rights because he fails to pay child support. However, those rights can potentially be lost for other reasons, such as the father's absence, abandonment, neglect or abuse of the child.

A noncustodial father pays child support to cover the child's needs that arise in his absence. If the child support is not paid, the child's custodial parent can turn to the state or legal system for assistance. Once the state is involved, it attempts to secure child support from the father. However, the state's involvement does not automatically result in a father's loss of rights to see his child.

If a father wants to seek shared custody when the mother has sole custody, he needs to return to the same court that issued the original custody order and request its modification. He can also ask the court to modify the original child support order. If the father gains shared physical custody of his child, he becomes a custodial parent with potentially reduced child support obligations. As a result, the court may eliminate child support payments if both parents share equally in child care and expenses.

Divorce is never easy, but we can help. Learn More
My Rights as an Unwed Mother When the Noncustodial Father Abandons the Child

In Rhode Island, sole custody may refer to either physical or legal custody. Sole legal custody grants the custodian decision-making authority over the child, even if the other parent shares physical custody or has substantial visitation. In sole physical custody arrangements, one parent's home is the primary place of residence for the child, and the other parent receives limited or supervised visitation. Rhode Island law promotes the maintenance of family unity, so sole custody rarely means that the noncustodial parent has no visitation. However, in extreme cases of neglect, abuse or addiction, a judge may remove the noncustodial parent's visitation rights.

What Happens When You Don't Pay Child Support in Illinois?

Every child has a right to receive care and support from her parents, and this parental responsibility doesn't end ...

During the divorce process, courts often establish custody orders. If one parent is awarded sole custody, the other ...

If you are presently not living with the mother of your children, you may be dealing with child support issues. If you ...