Abandonment occurs when a parent has no contact with a child for a set period of time, which varies by state. Although an unwed mother often has more rights to make decisions for her child than a divorced mother, a legitimate claim of abandonment provides her with even greater rights than she previously enjoyed. 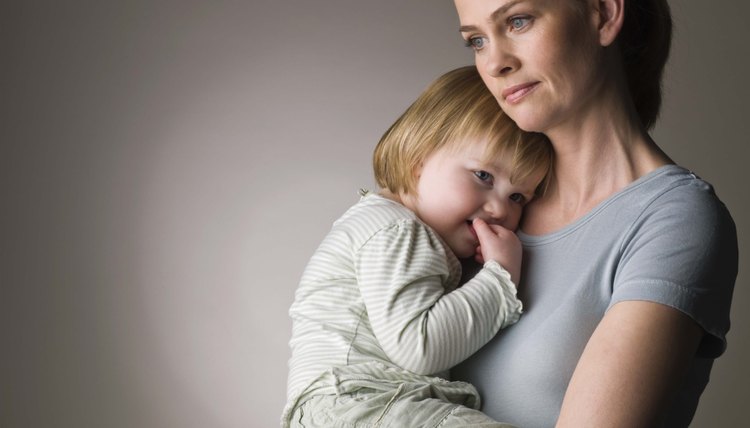 When a married woman has children, both parents share custody equally. Should the couple divorce, the court determines the custody arrangement. Often, both parents continue to share responsibility for the children's welfare and responsibility for making all legal decisions for the children through joint custody. In most states, an unwed mother has sole custody of her child as soon as he is born. Sole custody gives her the ability to claim physical custody of her child and make all of his legal decisions without first consulting with the other parent. The sole custody arrangement remains in place until the father establishes paternity.

If the child's father has not established his paternity of the child, abandonment means nothing. The father has no legal obligation to the child until he signs an acknowledgment of paternity document or submits to a court-ordered DNA test to determine paternity. Once paternity is established, the father reserves the right to file for visitation or joint custody. The father must also contribute to the child's financial needs by paying child support. If the father later abandons the child, the mother can petition the court to strip him of the parental rights he gained when he established paternity.

Unwed mothers are not the only parents who have the right to request that a court terminate the non-custodial father's parental rights due to abandonment. A divorced mother who has custody of her children can make the same request if her ex-husband ceases contacting or visiting with his children for the period of time stipulated as abandonment in her state of residence.

One exception to the abandonment rule for non-custodial fathers in some states is incarceration. A parent who is incarcerated is incapable of visiting with and sometimes contacting his children of his own accord. Should the non-custodial father go to prison, he cannot see his children unless their mother brings them to visit him. Some states, such as Connecticut, have specific guidelines in place protecting incarcerated individuals from losing their parental rights to an abandonment claim. Other states, such as Missouri, hold the individual responsible for his lack of communication with his child and may terminate his parental rights – even if that lack of communication occurred as a result of incarceration.

Protect your loved ones. Start My Estate Plan
Terminating Visitation Due to Incarceration

In most states, when an unmarried woman gives birth, she automatically and legally has sole custody of her child. Mississippi is no exception. When a married woman has a child, the state presumes that her husband is the father. In legal terms, “presumes” means that it is true until proved otherwise to a court's satisfaction. If the woman is not married, her child has no presumed father. Her child’s biological father therefore has no rights unless he takes steps to correct the situation.

Parents' custody rights vary from state to state. Historically, courts favored mothers when granting custody, but California focuses on the health, safety and welfare of the child. Judges base custody decisions on what is in the best interests of the child, and neither parent is preferred based on gender. Courts look closely at which parent was the primary caregiver, reviewing who took the children to school and doctor’s appointments, picked them up from school, helped with homework and planned daily activities.

Child support and child visitation rights are two separate issues. A father has the obligation to support his child and ...

Both parents have a responsibility to provide for the financial needs of their minor children in California. When one ...

The termination of a father's rights is a legal process that severs all ties the father has to the child. The father ...

Marriage is not a prerequisite to parenthood. The Centers for Disease Control and Prevention note that in 2009 alone, a ...