Signing Over Marital Rights in PA

Pennsylvania state laws protect spouses by establishing marital rights and obligations. However, a husband or wife may ask the other spouse to waive some marital rights at various times in their relationship. Spouses who would like to give up some of their marital rights may be able to do so through an agreement or estate plan. Before signing over any rights, however, each person should know the marital rights given by law and understand the future consequences of waiving those rights. 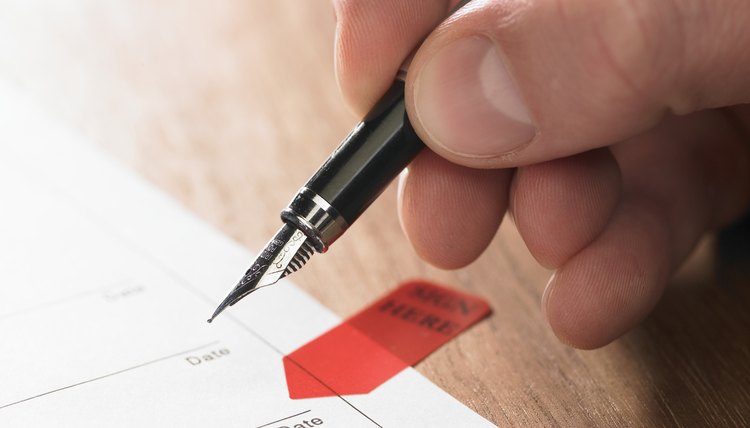 Spouses establish their marital rights through a legal marriage recognized by a state. In Pennsylvania, state laws determine marital rights in the event of divorce or the death of a spouse. Many types of marital rights relate to spouses' financial circumstances: their assets and debts. For example, Pennsylvania laws determine how spouses share rights to marital property and how a spouse can maintain separate property — these rights are often relevant in a divorce as well as after a spouse's death. Other rights, such as the right to request spousal support, usually become available only if a marriage ends in separation or divorce.

Pennsylvania state laws determine spouses' rights in the event of a divorce, but the parties can agree to an alternative arrangement. For example, spouses who cannot settle their property issues during a divorce require a division of their property by a state court — in these cases, the court must follow Pennsylvania's equitable distribution laws to assign a fair share of the couple's property to each spouse. Individuals who do not wish to follow the state's equitable distribution laws may sign over some property rights in a prenuptial agreement before marriage or in a postmarital agreement at any time while married. One party might also ask the other person to give up the right to spousal support. Although spouses may sign a contractual agreement containing their own terms, they must follow Pennsylvania law regarding marital agreements, and one spouse might still be able to challenge the agreement at a later date.

If spouses lack a premarital or postmarital agreement, they must resolve their marital rights and obligations before finalizing the terms of their divorce in Pennsylvania. Spouses can negotiate their own separation and property settlement agreement to divide their property, establish spousal support and take care of related legal issues. Either spouse may agree to sign over marital rights that a court would otherwise grant without the spouses' settlement agreement. However, parents often cannot give up the rights of their children as part of a divorce settlement. For example, a parent generally cannot sign over the right to receive child support. Pennsylvania state laws require a court's review of the children's best interests before establishing divorce terms related to children.

Rights in the Event of a Spouse's Death

Pennsylvania wills and probate laws protect spouses' marital rights in the event of a spouse's death. In general, a spouse's will cannot completely disinherit the other spouse. If a husband or wife's will does make provisions for the surviving spouse, the living spouse may be able to choose between the marital rights included in the will and the "election" share established by state law. An election share sets amounts of property to which a spouse has rights by law through marriage. The amount of the election share depends on whether the spouse who died also has surviving parents or children. Pennsylvania law specifically allows a spouse to waive the right to an election share at any time before or during marriage by signing an agreement — for example, a couple might agree to a waiver of the election share by signing a premarital agreement or an estate plan.

Divorce is never easy, but we can help. Learn More
Virginia State Laws on Divorce Settlements

Does a Prenuptial Agreement Take Priority Over a Last Will & Testament?

How Does a Person Contest a Will?

Of the vast numbers of wills probated each year, most don’t encounter significant problems. On occasion, however, a beneficiary -- or sometimes a person surprised not to be named as a beneficiary -- may question a will's validity. The court has authority to hear legal claims challenging a will’s validity. The court also has authority to consider state statutes that supersede the will’s provisions.

To prevent the distribution of your assets to a potential spouse if you later divorce, consider drafting a prenuptial agreement. A prenuptial agreement is an agreement between you and your potential spouse that describes how you would like your property distributed upon divorce. However, to be recognized as valid in Ohio, the agreement must fulfill certain requirements including being signed in the presence of two witnesses.

What Can a Spouse Waive in a Legal Separation?

State laws determine each spouse's rights during legal separation — these rights are often similar to the rights of ...

When a husband and wife divorce in Pennsylvania, they often need to divide their property. If spouses cannot reach an ...

Some couples choose cohabitation and decide to live together without marrying. If a couple lives together outside of ...

Getting a Marriage Annulled in New Orleans

Some spouses prefer annulment over divorce because of their religious beliefs or other personal reasons. When a couple ...