What Does Spend-Down Inheritance Mean?

If you are receiving certain government benefits, such as Supplemental Security Income or Medicaid, your eligibility is means-tested, meaning that you must not exceed a certain level of income or resources to remain eligible. If you receive an inheritance by the terms of a will or trust, you may exceed these eligibility levels. "Spending down" an inheritance means disbursing the money to remain eligible for public assistance. Inheritances do not affect your eligibility for Social Security retirement benefits or Social Security Disability, not to be confused with the Supplemental Security Income program. 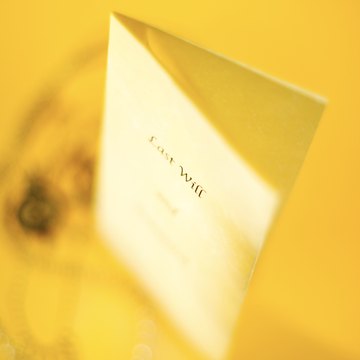 The Social Security Administration operates the Supplemental Security Income program for persons who are disabled and unable to work, and who have very limited income and resources. The SSI resource limits as of 2012 were $2,000 for a single beneficiary and $3,000 for married couples. Collecting an inheritance valued above these amounts would end your eligibility for SSI benefits and Medicaid, which usually go together. Social Security rules require you to declare significant changes to your resources, including an inheritance. The agency will count money as well as certain forms of property, including homes, land, cars, and jewelry. But generally, the home in which you live and one car that is necessary for transportation are excluded from the means test.

The Medicaid program is funded jointly by state and federal funds which are administered by the states according to their own rules and guidelines. Income, including an inheritance is counted in the month you receive it, so if you properly spend the inheritance before the end of the month, it will not be counted in the following month as an asset. However, if you inherit property or improperly dispose of a cash inheritance, you may still exceed the asset limits placed on Medicaid recipients.

In addition to SSI, Medicaid is also an important source of funds for seniors planning to enter nursing homes. Federal guidelines set out minimum allowable assets for eligibility, but states often have their own rules. The federal government mandates a "look-back" period of five years, so eligibility for nursing home care is affected if you have gifted any portion of an inheritance -- cash, investments, valuables or real estate -- to a relative or spouse during this period. Individual states may be more lenient; for example, the MassHealth (Medicaid) program in Massachusetts allows applicants to freely transfer a home to a spouse, a child under 21, a sibling who was living in the home for at least a year or a child who was caring for an elder parent at least two years before the parent entered a nursing home. Many states make exceptions for property transferred to your spouse, and exempt a portion of assets held jointly.

In some cases, inheritances may be preserved without completely losing the use of the money, yet still remaining eligible for public assistance programs. Depending on the laws of your state, you may remain eligible for Medicaid by gifting all or part of the inheritance to a special-needs trust, meant to assist you or someone else with medical expenses. You may also place the funds in an irrevocable trust, the terms of which you cannot change once the trust is legally created and funded. A funeral contract that covers future expenses for the benefit of your relatives, may be a proper use of an inheritance. If you are expecting an inheritance that may affect your eligibility for Medicaid or SSI, it's a good idea to consult an experienced attorney or financial adviser to guide you through the complex issues.

All living trusts are not created the same -- and this is a crucial issue if you're planning to use one as a way to qualify for Medicaid for your long-term care. Medicaid will pay for a nursing home subject to some rules, one of which concerns your assets. If have the option to sell assets to pay for your care, you don't actually need Medicaid to pay for you. Medicaid is funded by state and federal governments -- and the government won’t part with money if it doesn’t have to do so.

How Does Divorce Affect Food Stamps?

Eligibility for the federal Supplemental Nutrition Assistance Program (SNAP) – often called food stamps – is primarily based on your income and family size, which can change after divorce, but the exact method of calculation varies by state. For example, some states count the value of your vehicle while others do not. However, divorce itself does not affect your eligibility.

How to Create a Special Needs Trust With an Inheritance

Parents and other loved ones often have the best intentions when they leave an inheritance to a family member who has disabilities or who has been determined to be disabled by the Social Security Administration. However, this inheritance may do more harm than good because it can interfere with receiving government benefits, such as Supplemental Security Income (SSI) and Medicaid. Drafting an effective special needs trust can be challenging, and a mistake can have serious consequences. It is best to consult an experienced estate planning attorney when considering a special needs trust.

How to Shelter Assets from Nursing Home Care Costs

Nursing homes provide a valuable service for elderly and disabled individuals who cannot adequately care for ...

What Is an Irrevocable Medicaid Trust?

The cost of long-term care, even for a short while, can easily eat up an individual or couple's estate. An irrevocable ...

Does a Will Supersede Medicaid Rules?

The Medicaid program was created in 1965 to financially assist people with severe medical needs who might require ...

Social Security Rules for Diverting Income to a Trust