What to Do If Your Spouse Filed an Uncontested Divorce & You Did Not Know?

A divorce doesn't start out as uncontested – it ends that way. In most states, uncontested simply means that spouses have reached an agreement on all issues so they can divorce without a trial. In some states, however, it can also mean that the defending spouse has done nothing toward taking an active part in the proceedings. If this happens to you because you're unaware that your spouse has filed for divorce, you often have recourse. 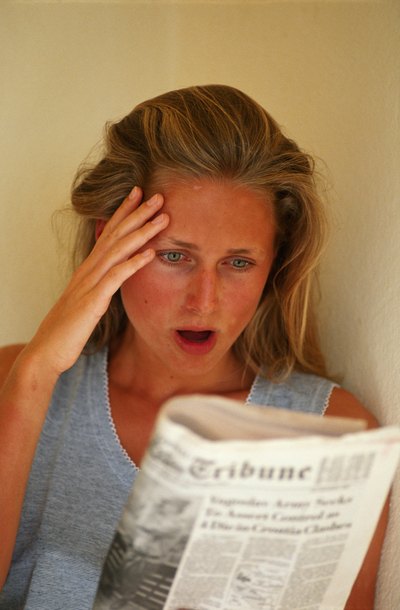 In some states, it's possible to file for an uncontested divorce to begin the proceedings, but your spouse can't do it alone without your knowledge. For example, in Ohio, you and your spouse can file a joint petition to dissolve your marriage and attach a copy of your settlement agreement, showing the court that you've resolved terms for child support, custody, visitation, property division and payment of marital debts. Otherwise, divorces begin as contested matters, without an agreement, then become uncontested when spouses resolve their own issues before trial. In either case, the divorce can't occur without your knowledge because your signature is required on the settlement agreement.

If you don't file an answer to your spouse's petition or complaint for divorce, he can get a divorce by default. After a statutory period of time that varies by state, your spouse can ask the court to grant him a divorce regardless of your lack of participation. The judge will generally award him all the things he asked for in his complaint. He can't do this unless he can prove that you received a copy of the divorce paperwork, however. He must show that you knew he filed and that not getting involved was your choice.

After your spouse has filed for divorce and served you with a copy of the paperwork, he must submit a document to the court showing how this was accomplished. Most states require that he have the county sheriff hand deliver the paperwork to you, or use a private process server. Some states allow service by certified mail, or he can give you the papers personally if you sign an acknowledgement that you received them. In any case, he must provide the court with a copy of your signed acknowledgment, the certified mail receipt, or a sworn statement from the person who gave you the documents. If he doesn't do this, the divorce can't proceed unless he asks the court for special permission to serve you by publication. He must prove to the court's satisfaction that he tried everything possible to locate you and that he failed. If you left the area and have no friends or relatives remaining there, and he receives permission to post notice of the divorce in the local newspaper, it's possible you might never know about the notice. He would then be granted an uncontested divorce by default.

If the divorce goes through and you find out about it later, you usually have a period of time within which to ask the court to set aside or vacate the default judgment. This involves filing a motion to let the court know what's happened. You'll need a good reason for not responding to his divorce papers, such as you moved and were unaware of the published notice. The court will reopen your case and try the issues rather than just award your spouse whatever he asked for in his complaint. However, it's possible that you might not lose much if a default divorce is granted. Some state courts, such as those in Florida, will not rule on things like support, custody or property division unless you're personally served with the divorce documents. It's possible that all the court will award your spouse is a divorce, ending the marriage without resolving any major issues.

Divorce is never easy, but we can help. Learn More
The Response to a Petition for Dissolution

Can I Be Divorced & Not Have Papers?

In some circumstances, it’s possible that you could be divorced and not even know about it because you never received a final decree. Different events would have to dovetail for this to occur. If they have, you can usually find out if you're divorced by doing a little detective work.

Whether you cannot track down your spouse or he is completely unresponsive to your divorce complaint, you may still ask courts in Alabama to grant you a divorce without your spouse's input. A default divorce is granted when one spouse files for divorce but the other spouse does not file any documents with the court and does not show up to the final hearing. However, you must ensure that you properly notified your spouse about the divorce, or he may ask the court to void the default judgment.

What to Expect at a Dissolution Hearing

By the time you've worked your way through the divorce process and it's almost over, you probably feel like an old pro. You might even find yourself giving advice to your friends. Then you realize you have one more hurdle. You can't get a divorce – called a dissolution in some states – until you attend a final hearing. There are two types of dissolution hearings.

What if My Wife in New York State Refuses to Divorce Me?

Until 2010, if you lived in New York and your wife refused to divorce you, she could have complicated the situation ...

How to Get a Divorce When One Spouse Won't Agree

No one can stop you from getting a divorce if you want one, with the possible exception of the court. If you don’t ...

What Happens if I Ignore Divorce Summons Papers in New York?

The ostrich-like tactic of burying your head in the sand never works in a divorce situation. Depending on the extent of ...

What Happens When Your Spouse Disappears in the Middle of Your Divorce and Is Represented by Counsel?

It's possible for a spouse to disappear midway through divorce proceedings, especially if he doesn’t want the divorce. ...