Standards for Moving Children During a Divorce in Georgia

The Georgia Supreme Court issued a landmark decision in 2003 regarding parental relocation, effectively turning previous case law in the state on its ear. If you're going through a divorce and you want to leave the state, that's fine – but the court may not let you take your children with you. Permanent custody isn't awarded until your final divorce decree is issued, and the decree could give custody to your children's other parent if you hope to move them out of state. 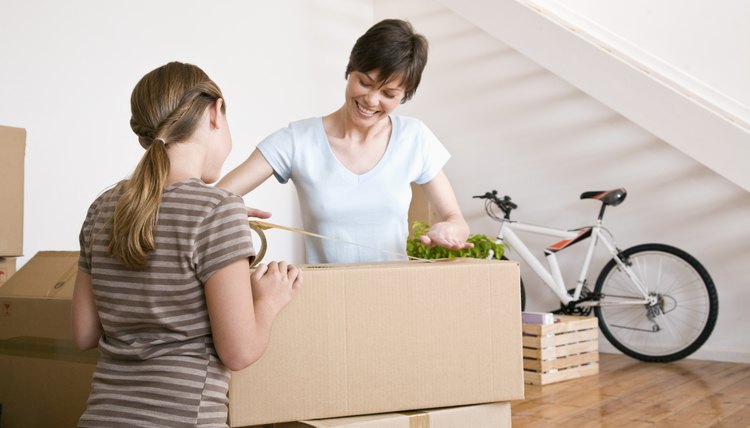 When you file and serve divorce papers, you give the Georgia court jurisdiction over issues pertaining to your marriage. These issues include custody of your children during the divorce process. By Georgia law, you must notify your spouse of your new address, even if you're simply moving across town. If you decide to move out of state and take your children with you, the court has the power to order you to return them if your spouse files a motion requesting it. You have the right to file a motion yourself, however, asking the court for temporary custody pending your final divorce. You can request that the temporary custody order include provisions that would allow you and your children to move.

If you and your spouse have separated but neither of you have actually filed for divorce yet, there's no active litigation. You might think this makes it easier for you to relocate with the children without court involvement, but this isn't the case. Georgia has adopted the Uniform Child Custody Jurisdiction and Enforcement Act. Under the terms of the UCCJEA, the only state that can make orders regarding your children's custody – including officially giving custody to you – is the one where your children have lived for the last six months. If this is Georgia, you'd have to live in another state – with your children – continuously for a six month period before that state would have jurisdiction to issue an order giving you custody. During this six month period, your spouse can file for custody in Georgia, and Georgia can order you to return the children to the state.

Almost without question, you'll need Georgia's permission to relocate with your children, during or after your divorce. If there's active litigation, Georgia statutes require that you give your spouse 30 days' notice of your intention to move. If your spouse objects, he can involve the court to stop you. In 2003, the Georgia Supreme Court was willing to change an existing custody order, granting custody to the parent who was not relocating rather than allow the custodial parent to move with the children. This paved new ground because Georgia historically allowed such moves based on the presumption that relocating custodial parents had a right to retain physical custody; objecting parents would have to demonstrate that the move was not in their child's best interest in order to overcome this presumption. As a result, it's by no means a sure thing that a Georgia court will automatically allow you to relocate just because you want to, unless you can prove some compelling circumstance that makes the move beneficial for your children, not necessarily for you.

If any of your children are teenagers, they might have the final word regarding whether they move. Georgia is somewhat unique in that it allows children 14 or older to decide which parent they want to live with. The child's preference is controlling – this means if he says he doesn't want to move and wants to remain with his other parent, the court is obligated to grant his request unless his chosen custodial parent is unfit. The court must at least consider the feelings of children as young as 11. In addition to your children's wishes, Georgia judges must weigh other factors when deciding custody issues. This includes consistency of the children's environment, such as their home and community, as well as your ability to maintain a healthy relationship between your children and their other parent.

Divorce is never easy, but we can help. Learn More
If You Get Divorced in Georgia Can You Move to a Different State With Your Kids?

The Uniform Child Custody Jurisdiction and Enforcement Act is recognized by 49 states, as of 2012, including Virginia. What this means for parents seeking a divorce in the state is that a court can't rule on your custody issues unless and until your children establish residency there.

Although there may be no such thing as a perfect divorce, most states attempt to achieve that ideal, at least where children are concerned. Georgia is no exception. The state's legislative code makes frequent mention of the importance of preserving the parent-child relationship, and it does not allow parents to divorce unless a detailed parenting plan is in place first. When parents can't agree to a parenting plan, a judge will order one.

If you have a temporary child custody order, the court may or may not permit you to leave the state of Georgia with ...

Can You Relocate With a Child Before a Divorce in Georgia?

When you decide to end your marriage, moving to another city -- or even another state -- may seem like your best ...