Summons for Divorce in Tennessee

The state of Tennessee recognizes 15 legal grounds for divorce, including the no-fault grounds of irreconcilable differences and continuous separation between childless couples for at least two years. The process starts with one party, known as the plaintiff, serving a summons on the other spouse, known as the defendant. The road to a final settlement can be short or long, depending on the circumstances. Since divorce can be complex, consult an experienced attorney before entering settlement negotiations on your own. 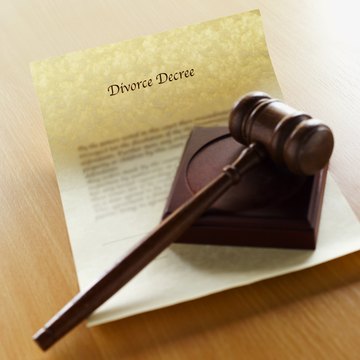 A summons for divorce, also called a petition for divorce in Tennessee, serves as notification of the lawsuit. The petition includes a complaint for divorce, which cites the reason for the action. Unless the petitioner is asking the court to grant the divorce based on irreconcilable differences, the complaint alleges a wrongdoing or misconduct of the defendant. If this is the case, the petitioner must verify the summons by signing an affidavit, or making an oath or affirmation, before a judge, court clerk or notary public.

Notification of the divorce action is not legally sufficient until the summons for divorce is properly served on the defendant. Usually, a process server or a sheriff’s deputy delivers a summons for divorce personally. If the defendant cannot be served personally, Tennessee laws permit service by publication or mail. If service is made by mail, the defendant is asked to sign a waiver of service of process to acknowledge receiving notice of the lawsuit. If refused, the petitioner can ask the court to attach the cost of a process server to the defendant.

If a summons for divorce in Tennessee includes fault-based grounds, such as marital misconduct, an automatic injunction is placed against both parties. The action is intended to deter either party from harassing the other or from initiating the premature sale, transfer or squandering of marital assets before the divorce proceeds to the financial discovery phase to reach a final settlement regarding property distribution, custody and child support.

Divorce is never easy, but we can help. Learn More
How to File for Divorce in Virginia Without a Lawyer

Virginia is one of a handful of states that does not recognize the phrase “legal separation,” but this doesn’t mean you can’t legally separate there. You and your spouse can part ways, then negotiate and sign a separation agreement resolving issues between you. Virginia calls separation agreements “property settlement agreements,” although they address issues of custody as well as property. If you refuse to sign the agreement, your spouse can involve the court to resolve any issues.

How to Obtain a Divorce in North Carolina

If you wish to obtain a divorce in North Carolina, you can hire an attorney to handle the process for you or you can file on your own. If you opt to represent yourself in divorce proceedings, you will be known as a "pro se" litigant. You file divorce papers in the North Carolina county where you reside. Because specific rules for filing can vary from county to county, North Carolina State University suggests that you contact your county's clerk of court before you proceed with a divorce action.

The Code of West Virginia Regarding the Grounds for Divorce

West Virginia offers both fault and no-fault grounds for divorce. If the parties agree on the divorce, or one spouse ...

How to Get Divorced in Tennessee

A divorce ends a valid marriage in Tennessee. Provided you can meet the state eligibility requirements, the process ...

Steps for Filing Divorce in California

If you are seeking a divorce in California, you must follow the state's filing procedures and, in most cases, attend a ...