Does a Will Supersede Medicaid Rules?

The Medicaid program was created in 1965 to financially assist people with severe medical needs who might require long-term hospitalization and incur significant health care costs. Generally, only the most impoverished individuals who cannot afford nursing homes any other way are eligible for Medicaid. Since the cost of a nursing home might far exceed a patient’s assets, some older Americans deliberately dissipate their property to become eligible for Medicaid. However, individual states have the right to recover Medicaid paid on behalf of a patient from his estate after he dies. Leaving a will cannot prevent or supersede this. 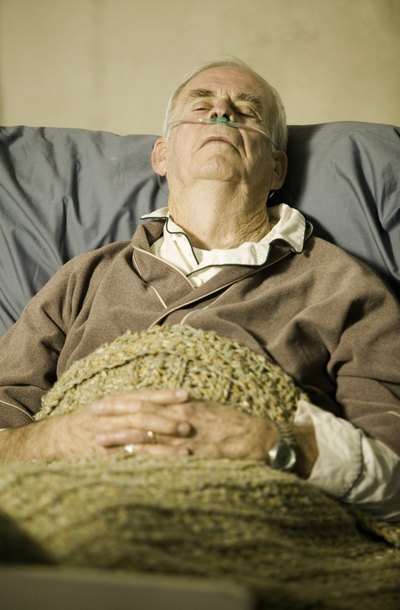 In 1993, the federal government issued an Estate Recovery Mandate to all states obligating them to at least take an individual’s assets that pass through probate. At their option, states can also take non-probate assets from an estate to recover Medicaid costs, such as life insurance payouts that ordinarily would pass directly to a named beneficiary. According to the U.S. Department of Health and Human Services, however, only 24 states report taking recovery to this extreme.

States can only recover Medicaid from the estates of people who were older than 55 years of age when they received the assistance or were permanently institutionalized. Medicaid claims cannot be recovered while a surviving spouse is still alive, from a child under 21 years of age or from a blind or disabled child. In some cases, if certain relatives lived with the deceased for one to two years prior to the patient’s admittance into a nursing home, recovery can also be deferred.

Some state laws prevent Medicaid recovery to some extent. For instance, all states have an order of priority for claims against an estate in probate. Taxes, secured creditors and funeral costs are usually paid first. Medicaid is usually recovered after other, more significant claims are satisfied. Some estates have nothing left, or very little, to disburse at this point. When the assets of an estate are exhausted, states cannot go after heirs and beneficiaries for repayment of Medicaid. They can only recover up to the value of the estate that is available to them.

Protect your loved ones. Start My Estate Plan
What Does Spend-Down Inheritance Mean?

Legal Duties of the Named Executor of the Will

Executing a will might take a few months to a few years, depending on the complexity of the estate. Executors are legally liable for the safekeeping of the testator’s property, and for making sure all estate debts and taxes are paid. Most states require that an executor post bond when she assumes office. This is an insurance policy that will pay any financial claims against her if she deliberately or inadvertently does something wrong that financially hurts the estate.

In 2009, Oregon began taking a notably tough stance against parents who willfully refuse to pay child support; the Department of Justice arrested 21 non-custodial parents and subsequently collected more than $530,000 for their families. If you owe child support arrearages, although incarceration is usually Oregon's last resort to convince you to pay up, it can happen. Judgments for child support in this state are enforceable for 35 years after the date of your divorce decree, if your decree includes provisions for child support. Otherwise, the time begins running from the date of your support order.

Can You Owe Child Support After a Child Is 21?

Nothing about divorce is ever totally black-and-white, including child support. Under most circumstances, you won't have to pay support if your children are over the age of 21. But exceptions exist to every rule, so it's possible that you might end up paying for a short while after your child's 21st birthday -- or even indefinitely.

How to Shelter Assets from Nursing Home Care Costs

Nursing homes provide a valuable service for elderly and disabled individuals who cannot adequately care for ...

What Is a Family Allowance Under Florida Probate Law?

A family allowance under Florida probate law is an amount of money granted to a deceased person's surviving spouse and ...

Divorcing after a long-term marriage can leave a wife in a financial pickle at retirement age if she gave most of her ...

It's sad enough when one spouse enters a nursing home for long-term care. Compounding this difficult situation is the ...