If your marriage is in trouble but you haven’t filed for divorce yet, you may be in a vulnerable position if your wife wants to take your kids and cross the Texas state line. You can remedy that by conferring with an attorney and acting immediately. Both Texas and the federal government have laws in place that allow you to prevent this sort of thing, at least temporarily. 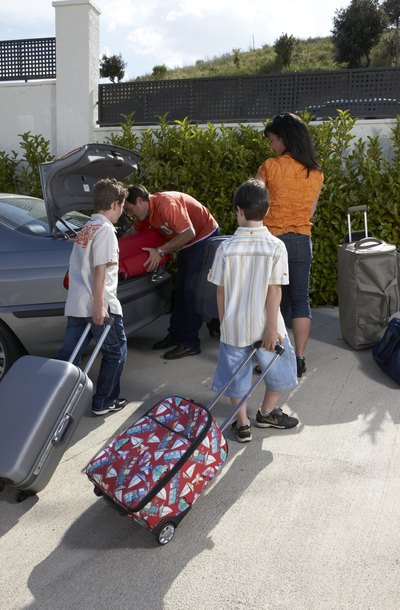 Even before the Texas government becomes aware that your marriage is ending, the Uniform Child-Custody Jurisdiction and Enforcement Act gives you six months to make sure Texas has jurisdiction over your eventual custody dispute to keep your children in the state. Under the terms of the UCCJEA, your children’s home state is where they have resided for the past six months. If your wife relocates to Kansas with your children, and if you do nothing about it during that time, it’s conceivable that she could file for full custody there after six months' time, because that state could now claim jurisdiction.

Texas gives you two options during this six-month period. You can file a SAPCR, Texas’s acronym for “Suit Affecting the Parent-Child Relationship,” to prevent your wife from leaving with your children until a court can decide the issue, or to force her to bring them back until you can get a judge's ruling. You can also immediately file for divorce. A SAPCR is part of every divorce action in Texas when you have children. Either way, you’ve notified the court that there is a problem. You can now file a petition or motion to have the court address the situation, and the judicial system will ultimately decide whether to let your children leave or to rule that they must stay in the state.

Until 2002, Texas had a reputation for generally disallowing an out-of-state move by a parent with her children. Since then, however, the courts have become more lenient. Ultimately, when you get before a judge, he will base his decision on several factors. One such factor is your existing relationship with your children. If you’ve been very close with them, and especially if you and your wife haven’t separated yet, abruptly moving your children away from you might cause them considerable trauma. If you’ve been living separately and you haven’t seen your children much, this could work against you. The biggest factor a Texas court will usually consider is the reason your wife wants to move. If it’s to be closer to the support of her family after the two of you part ways and she's on her own, or so she can earn more money to better help support your children, a judge might be more inclined to rule in her favor.

Texas’s rulings regarding relocation vary somewhat from county to county and with the opinions of individual judges. If you want to fight your wife’s move, speak with an attorney in your county as soon as possible. In Lenz v. Lenz, a Texas Supreme Court judge ruled that a mother’s happiness affects the well-being of her children, so he permitted her to move. In Echols v. Olivarez, a judge decided that forbidding a parent to move doesn’t accommodate the realities of post-divorce life. However, in Bates v. Tesar, the judge denied the mother the right to move because she didn’t have sufficient reason to relocate, and because the children had a very close relationship with their father.

Divorce is never easy, but we can help. Learn More
Moving Out of State in the Middle of a Custody Battle in Texas

Laws on Moving Out of Texas During a Divorce

If you don't have children, moving out of Texas during your divorce proceedings might be an inconvenience, but it isn't against the law. However, if you have children and relocate with them out of state without the court's approval, you're in big trouble. Even if you are the custodial parent, you cannot move your children to another state unless the family court grants you permission to do so.

A Tennessee Divorce: Can an Abusive Husband Get Custody of the Children?

Tennessee law favors joint custody when couples divorce, but Section 4:1.04 of the state's code instructs judges that "in domestic abuse cases, joint custody is inappropriate." If a judge follows this rule and does not order joint custody after an abusive marriage, it's unlikely that he would give sole custody to the parent who made joint custody inappropriate through his abusive behavior. This would effectively reward him for committing the abuse.

Can I Still Get a Divorce if My Wife Is Pregnant in Texas?

How to Handle a Divorce While Pregnant

When you’re pregnant and divorcing, the effect can be emotionally devastating. If you decide you’re going to move ...