How to Transfer Inheritance to a Sibling in Probate

When an individual dies, his property passes to his heirs as directed by his written will, in which he declares bequests of money, homes, land, investments and other assets to named beneficiaries. If no will exists, a probate court oversees the distribution of the decedent’s estate to the rightful heirs, usually family members, as determined by state law. During probate, it is possible for one sibling to transfer property to another under certain circumstances. 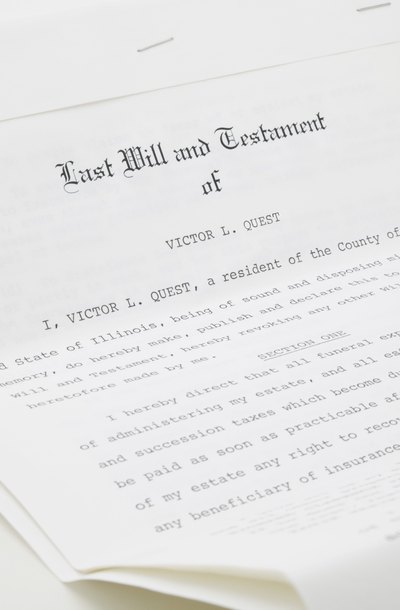 Heirs cannot change the terms of a written will before or after the death of the testator. Therefore, if a written will exists and it is being probated, the heirs must either accept the inheritance or disclaim it. If assets are disclaimed, the probate court will follow state law and distribute those assets to the other heirs. If your sibling is the only other primary beneficiary, she will inherit your disclaimed bequest.

You should familiarize yourself with the terms of the will before you attempt to affect its outcome. If your sibling is not named in the will, you will not be successful in transferring property to her by disclaiming the inheritance. Instead, your inheritance will go to the other primary beneficiaries named in the will. If contingent beneficiaries are named, they will also receive assets under conditions stipulated in the will. In the absence of a will, property is distributed as directed by state law, usually to the surviving spouse, if applicable, and children of the marriage (natural or adopted).

If you wish to transfer inherited assets directly to a sibling, you must do so after the probate court has distributed the assets as directed in the will or according to state law. Instead of filing a disclaimer with the court, you’ll need to take possession of the assets and then transfer them to your sibling by gifting the assets outright or transferring title.

If you inherit property such as a house or car, the executor of the decedent's will is responsible for transferring title to you during probate. After you take possession, you may transfer title to your sibling by following the laws and procedures in your state. For example, to transfer a motor vehicle, you must present the title certificate, an affidavit of transfer, odometer statement and any other required forms to the Department of Motor Vehicles. This agency will issue a new title in your sibling's name.

Protect your loved ones. Start My Estate Plan
What Happens When You Inherit Money?

The Difference Between a Will & an Inheritance

What Happens After You Are Appointed a Personal Representative in Probate?

It is both an honor and a responsibility to be named personal representative, or executor, in a loved one’s will. This designation means that the testator, or maker of the will, trusted you to manage her affairs after death. Personal representatives must interpret and carry out the deceased's wishes according to the will’s terms and comply with the laws of the state where the will is probated.

What Is a Universal Heir?

Creating a will gives you the opportunity to dictate who gets what after you die. After paying off your debts, the probate court distributes any remaining assets to your loved ones according to the directions you provided in your will. If you leave all of your remaining assets to one person rather than stipulating that the court divide your assets between more than one party, the beneficiary of the inheritance is your “sole” or “universal” heir.

When Someone Dies, How Is the Estate Settled?

State law governs probate process and procedure, whether the decedent died with or without a will. Probate takes place ...

If your brother or sister dies owning property in Virginia, your sibling’s will and Virginia law determine whether you ...

How to Make Your Own Will Forms

A will is a document that tells a probate court how to distribute the assets of the person who wrote the will -- known ...

How to Refuse to Inherit a House

For various reasons, you may wish to disclaim property that was willed to you by a relative. Beneficiaries may file ...