Do Wills Have to Be Handwritten?

Speak with attorneys across the country, and you will likely hear the same advice: most people over the age of 18 should have a will. Without one, state statutes of descent and distribution step in to govern the allocation of assets to survivors. Handwritten wills, also known as holographic wills, are legal and binding in many states. However, each state defines what is acceptable within its boundaries. 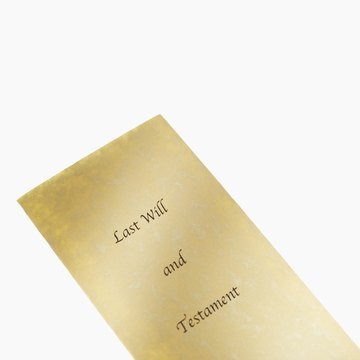 Handwritten wills are an option in some cases, but they are not mandatory. In fact, an improperly executed handwritten will could be declared invalid. Laws vary by state, but one of the most common requirements for a handwritten will is that it must be entirely written by the person's own hand. A handwritten will written by anyone besides the testator may be invalidated no matter how many witnesses have signed the document. Future typewritten additions, changes or codicils to a handwritten will may not be accepted. A holographic will should not contain a mixture of handwritten and typed words, explains the American Bar Association.

Proving the handwriting confirms that the will was written by the testator. In Tennessee, the signature and handwriting of the testator must be proved, or confirmed, by at least two witnesses who must sign their names in the presence of the testator and in the presence of each other, explains the Nashville Bar Association. Proving handwriting protects the testator from forgeries or additions made by another person at a later date and expedites the probate process. Having the will notarized does not always negate the need for two witnesses, and some states will invalidate the will entirely if it was not properly executed according to that state's laws. Some states accept a handwritten will without signatures, but many will not. Texas law states that a handwritten will may be written on anything as long as it is entirely in the testator's own handwriting, and there is no signature or witness requirement. Other states have different rules.

Protect your loved ones. Start My Estate Plan
Is a Handwritten Last Will & Testament Legal?

The maker of a will, commonly known as the "testator," must draft the will in accordance with the state's probate code for it to be held as valid. Generally, these formalities exist so that a probate court can verify the authenticity of the will. When a will is admitted to probate court, the court examines the will to make sure it was made in compliance with state law.

What Constitutes a Legal Will in Pennsylvania?

Valid Pennsylvania wills must meet specific age, mental state and signature requirements. Certain circumstances also require witnesses. If a will does not meet these requirements, Pennsylvania may nevertheless recognize its legality in certain situations if it is valid under another jurisdiction's laws.

Is a Will Created Without an Attorney Legal?

It is perfectly legal to make your own will, though you must take special care to ensure that the will complies with ...

In this age of technology, writing out a will by hand may not be the norm, but it is a perfectly acceptable alternative ...

A last will and testament is the final word of a deceased individual in which he directs the disposition of his assets. ...