Irish law concerning wills is governed by the Succession Act of 1965. This law is equally applied in all parts of the country. The purpose of a will in Ireland is the same as in most other jurisdictions: a legal means of allowing the testator to decide how his property will be disposed of after his death. It also allows him to appoint a guardian for his children and an executor for his estate. For an Irish will to be legal, all essential elements must be present, and it must conform to all relevant laws. 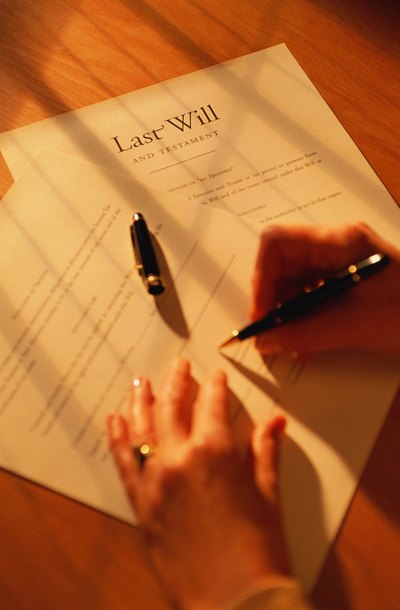 According to Lawyer.ie, the testator must be at least 18 years old; if not, he must either be married or have previously been married. In addition, he must have the mental capacity to understand that he is making his last will. The mental capacity is often legally verified by a sworn declaration from either a solicitor or a doctor who was present at the time that the will was signed. The testator must also act freely when writing his will, and not have any undue influence from anyone.

To be valid in Ireland, Lawyer.ie states that a will should contain the testator’s name and address, a clause revoking other wills, a clause nominating an executor, a clause appointing a guardian for any children, a list of bequests, a clause to dispose of anything that remains and the signature of the testator. The testator’s signature should be placed after all other components other than the signatures of witnesses.

Ireland's laws of intestacy will apply to the estate if a person dies intestate, or without a will, notes Damian Nolan Co. For example, if a testator has no children but is married, all of his property will be transferred to his spouse. However, if the testator is married with children, one-third of the estate will go to his spouse and the rest will be shared equally by his children.

In Arkansas, a resident can make a valid will if he's at least 18 years old and mentally competent. Arkansas law also requires a will to be written and attested by two witnesses. If an Arkansas resident dies without a will, his property passes to his surviving spouse and other heirs according to state law. These laws are called "laws of intestate succession." When someone dies without a will, he is said to have died "intestate."

A person who dies without leaving a will is said to have died “intestate.” New York courts distribute intestate property according to a statutory scheme of succession and these laws apply only to property located in the state of New York. Laws of other states may apply to real property located outside of New York, even if the decedent had been a legal resident of the state. The intent of New York's intestate succession law is to distribute the estate in the manner in which the decedent likely would have had she left a will; the statutory scheme distributes the decedent's property to the closest surviving relatives first.

In New York, a parent may make a will devising property to children. New York also allows parents to disinherit a child in a will; however, for disinheritance to be effective, a parent must use language that clearly and unequivocally states that purpose. If a parent doesn't make a will, children are entitled to a share of their parent's estate pursuant to state laws. These laws are known as laws of intestate succession, and they provide guidelines as to how property must be divided when a person dies "intestate," or without a will.

When a person dies, his estate, comprised of all property acquired during his lifetime, will be distributed to his ...

In most states, a legal or valid will must contain certain basic information, such as the testator's or will-maker's ...